Read PDF Cut Time: An Education at the Fights 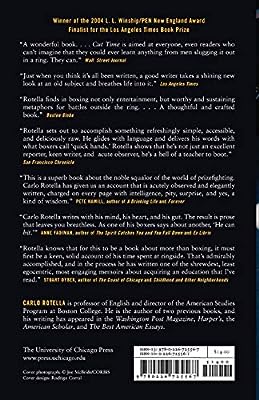 An award-winning writer and ringside veteran, Rotella unearths the hidden wisdom in any kind of fight, from barroom brawl to HBO extravaganza.

Tracing the consequences of hurt and craft, the two central facts of boxing, Rotella reveals moving resonances between the worlds inside and outside the ropes. The brief, disastrous fistic career of one of his students pinpoints the moment when adulthood arrives; the hard-won insight of a fellow fan shows Rotella how to reckon with a car crash. Mismatches, resilience, pride, pain, and aging—Rotella's lessons from the ring extend far beyond the sport. In Cut Time , Rotella achieves the near-impossible: he makes the fight world relevant to us, whether we're fans or not.

An absorbing read. Rotella has preserved the blow-by-blow and the grandeur of another age but has somehow expanded the ring to include his own generation's proclivities and sensibility.

The fight world is grounded in relatively few pieces of real estate—the International Boxing Hall of Fame in Canastota, New York, for instance, or the Blue Horizon in Philadelphia—but it also floats across the landscape, touching down and coalescing in material form when a casino puts up a ring for a night of boxing, or when a trainer rents a storefront and fills it with punching bags and a couple of duct-taped situp mats and a ring for sparring.

When the gym loses its lease or when the casino has to clear its hall the next day for a Legends of Doo-Wop concert, the fight world packs up and moves on, traveling light. A ring is just a medium-sized truckful of metal struts, plywood flooring, foam padding, canvas, ropes, cables, and miscellaneous parts; it takes only a couple of hours for a competent crew to assemble it or break it down.

While the ring is set up it creates ringside—and the possibility of learning something. There are lessons to be learned at ringside.


Close to but apart from both the action and the paying audience watching it, you see in two directions at once: into the cleared fighting space inside the ropes, and outward at the wide world spreading messily outside the ropes. You must learn specialized boxing knowledge to make sense of what you see in the ring, but the consequences of those lessons extend far beyond boxing. The deeper you go into the fights, the more you may discover about things that would seem at first blush to have nothing to do with boxing.

Lessons in spacing and leverage, or in holding part of oneself in reserve even when hotly engaged, are lessons not only in how one boxer reckons with another but also in how one person reckons with another. The fights teach many such lessons—about the virtues and limits of craft, about the need to impart meaning to hard facts by enfolding them in stories and spectacle, about getting hurt and getting old, about distance and intimacy, and especially about education itself: boxing conducts an endless workshop in the teaching and learning of knowledge with consequences.

A serious education in boxing, for an observer as well as a fighter, entails regular visits to the gym, where the showbiz distractions of fight night recede and matters of craft take precedence. Gyms are places of repetition and permutation. A fighter refines a punch by throwing it over and over in the mirror and then at a bag and then at an opponent.

A short guy and a tall guy in the sparring ring work out their own solutions to the ancient problem of fighting somebody taller or shorter than oneself. My first and best boxing school has been the Larry Holmes Training Center, a long, low, shedlike building facing the railroad tracks and the river on Canal Street in Easton, Pennsylvania.


He has been retiring and unretiring since then, fighting on through his forties and past fifty. His afternoon training sessions at the gym have allowed younger fighters to work alongside a master, and interested observers to watch. He puts technique before musculature, good sense before crowd-pleasing drama, perseverance before rage. Boxing is unnatural: instinct does not teach you to move toward a hard hitter, rather than away from him, to cut down his leverage; you do not instinctively bring your hand back to blocking position after you punch with it; almost nobody feels a natural urge to stay on his feet when badly hurt by a blow, or to get up within ten seconds of having been knocked down.

Even after a lifetime of fighting, a boxer has to reinforce and relearn good habits in training. My education as a ringsider probably began at the first school I ever attended, the Ancona Montessori School.

CUT TIME: An Education at the Fights

I spent the better part of two years there banging a green plastic Tyrannosaurus rex into a blue plastic Triceratops and then putting them away where they belonged, which is what Montessori schools and well-run gyms are all about , absorbing the widely applicable groundline truth that styles make fights.

The gangly T. Among nonextinct fighters, I knew who Muhammad Ali was, but he was mostly a face and a voice, like Fred Flintstone.

The first boxer I recognized as a boxer was Larry Holmes, who was sizing up and solving one contender after another, some- times on television, when I was in high school. Holmes, part T. I go there to watch, not to train. Yale and Harvard and other schools like them have, in fact, been my Yale College and my Harvard. You can get an education at ringside, but you also bring your own education to ringside.

Visits to ringside and conversations with fight people inspire visits to the archive to pursue context and understanding. The archive of boxing includes a library of edifying and sometimes elegant writing that reaches from the latest typo-riddled issue of Boxing Digest all the way back to a one-punch KO in book 23 of the Iliad, but it also includes many thousands of fights on film and videotape.

Seeing a bout from ringside sends me to the VCR with a stack of tapes to study the styles and stories of the combatants, or to consider analogous fights informed by a similar principle: bomber versus tactician, old head versus young lion, showboat versus plumber. Gary and Mike trade tapes with a motley network of connoisseur collectors, fistic philosophes, and aggression freaks who convene on the Internet to argue over such arcana as whether John L.

Sullivan could have coped with Roy Jones Jr. Even if it begins in the gym, a ringside education has to reckon with television, which has dominated the fights since it rose to power in the s. Announcers, producers, and technicians have a roped-off section of ringside to themselves. Camera operators with shoulder mounts stand outside the ropes on the ring apron, trailing cables behind them as they follow the action.

These days, cameras and microphones can bring spectators at home closer to the action than would a ringside seat. Some part of me knows that this is all deeply intimate and therefore none of my business, even as I pause the tape and then rewind it so I can write down exactly what the trainer said and note the precise sequence of punches.

But television hides as much as it reveals. For one thing, it tells you what to watch.

It does not let you turn around to look at the crowd, whose surging presence you can hear, and smell, and feel on your skin at ringside. It also muffles the perception of leverage and distance, the sense of consequences, available at ringside. After eleven Zapruderine replays, you still ask, Was that a hard shot or a glancing blow?

Did it knock him down or did he stumble? Had I been at ringside, I might have concluded that Holyfield hit so much harder than Ruiz that he deserved to win rounds in which he landed fewer blows. The apparatus of television is not always equal to the task of connecting action to its meaningful context. Television seems to get you close enough to see almost everything and taste the flying sweat, but its appeal lies primarily in cool distance.

That leaves it up to the on-air announcers to connect action to meaningful context. Talking from bell to bell, they model and parody the processes of education at the fights. Larry Merchant, the professorial one, offers boxing lore and the occasional historical or literary reference. George Foreman, who used to hurt people for a living, is the most sympathetic to the fighters, but wildly erratic and often plain wrong in his commentary. I pick up my credentials at the press table, hang the laminated badge around my neck, and make my way to ringside.